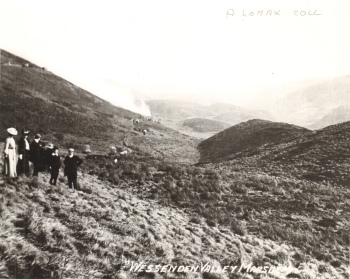 The last old track identified on the pre-Turnpike map is the one which led from the middle of the village, via Fall Lane, Binn Road and up the Wessenden Valley. A survey of the Manor of Marsden dated 1628 noted that this route was used to import burnt limestone from Knottingley and Pontefract to improve the arable land.

There was an old inn called The Shepherd's Boy which stood below the existing shooting lodge near Wessenden Reservoir. The 1740 will of Thomas Haigh, of The Shepherd's Boy, lists "drink in the cellar and lead and cistern brewing vessels. It is not known when it ceased to be a beer house but there was certainly a potential trade from the navvies who worked on building the reservoirs into the 19th century.

A farmhouse on Well Lane up Binn burnt down in 1943 and is remembered as once having been a Beerhouse it was certainly still trading up to the 1920s when Edith Doyle worked there as a barmaid before taking over as the landlady of The Moorcock on Mount Road.

During the 18th century, in common with the rest of the country, traffic increased and the use of wheeled vehicles grew. It became necessary to provide adequate roads to accommodate these changes and the Turnpike Trusts did just that. These better roads encouraged more traffic and this, in turn, led to the growth of purpose-built inns of a more substantial size, often with stabling, in contrast to the previously, more common, cottage-based ale houses.

People still remember a small inn up Wessenden called The Blue Pig though nothing has been found to indicate when it was first licensed or when it stopped serving beer. It is known that Edith Doyle worked at The Blue Pig as a barmaid in the 1920s prior to her and her husband taking over The Moorcock. After the alehouse was delicensed it reverted to being a farmhouse and its address was given as Lower Acre Head Road. It was totally destroyed by fire on Easter Sunday, 1943 and John Arthur Kaye lost his life fighting the fire. His wife and children survived.